Flóra Kőszeghy graduated in 2006 as architect at the Architectural Faculty of the Technical University of Budapest. Since 2004 she has worked in several important offices in Hungary. She started at the office of Erick van Egeraat dutch architect as she was only a student. Later she worked at Zoboki and Demeter Architectural Studio. At Tiba Architecture Studio she was one of the lead architects of the Telekom and T-ySystem’s Headquaters Office Builiding in Budapest. She also worked for Peter Kis, and had projects with Judit Z. Halmágyi, Dezső Ekler, and several other important architect in Hungary. Since 2018 she runs her own office, the Studio Kőszeghy, where she designs large and small scale projects with her team.
Meanwhile Kőszeghy is a painter, since her grandmother was the student of Aba Novák, the great Hungarian painter. She has learnt a lot from family traditions, but in the last 10-15 years she was doing experiments following her own artistic concepts. During the last 6 years she had several exhibitions in Budapest, Debrecen, Barcelona and in Vienna too. Her own point of view is easily recognisable, not only by the colors and the painting method, but after the mood of the paintings. The hardy or not even recognizable enlarged details change even the atmosphere of the exhibitions space. Since 2018 she is experimenting with the extension of the paintings into space. These large installations represent Kőszeghy’s aim to connect architecture and art in a conceptual approach. She mixes the different mediums in an extraordinary way.
She is member of the TÁP Theater, which is one of the most important alternative theater company in Hungary, where she is painting on stage in one piece and designing stage set in the other. In her former works she mixed film and painting, just like bringing literature together with painting, by cutting parts of written texts as titles for paintings. With the use of the different mediums her focus is on the change in the spatial-virtual thinking in our age. 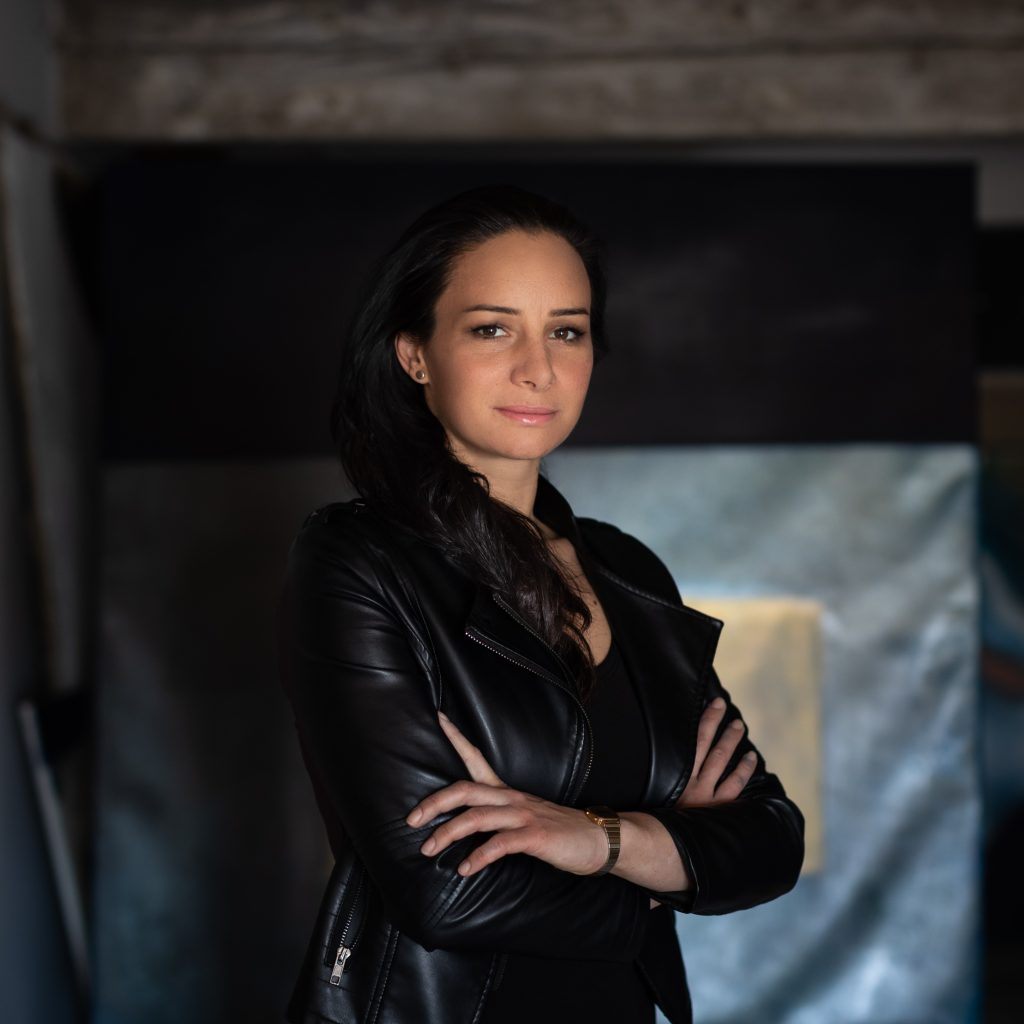 My works are based on spatial and planar cuts. The planar cuts are paintings. These are framed views, which are brought alive with the materiality of oil painting. The large canvases show details of objects, mixed and transformed. Finally they form a human-like shape, which is only recognizable from a distance. To see the paintings the viewer has to move. The painting technique, the colors and the subject, which is often an angel-shape, refers back to classical baroque painting.  Meanwhile the details and the inside of these angels are composed of details of machines, combined in a way they seem to be abstract, but still working as body-parts. Still the viewer can’t be sure to see everything right. This kind of uncertainty evokes a special sort of involvement, which makes these works interactive in a sensible way. The machine like body with it’s analogue origins seems old, although it refers to a futuristic mood. All these contradictions give a tension, which I use to evoke feelings. These are not definable sentiments, the uncertainty and the anachronism doesn’t let the mind respire.

The spatial cuts are based on the same concept, extended in the spatiality of a room. Since I am also an architect working with a computer software I am used to mix spatial and planar views. While designing a building we build the whole model in 3D and we use them through the screen. In our age the classical model of the dimensions of 1-2-3 extensions together with the time seem to be old-fashioned. The dimensions of the spatiality and the linearity of time has become so complex that it is almost impossible to define them based on our classical point of view. In the spatial cuts series my aim is to manifest the digital spatiality, and collide the screen and the reality. Just like in my paintings I experiment with the human body, covered with paintings, but the most important gesture in these installations is, that these enlarged bodies are cut by the walls, just like the photo is cut by the frame. This is an ordinary case in computer aided architectural design processes, since we happen to cut and form with the imaginary walls. In the end the buildings are built, the walls cut spaces, which is invisible in itself. Still I want to make the space visible, while I show the other side of the virtual space, which is it’s in-scalability. As I had to design a 110m long facade and it was only 50cm wide on my screen I had to follow the scale inside my mind. This made me understand how we can change our own scales. In front of my installations the viewer has a feeling of being small. This feeling is broadened by pieces of the paintings which refer to my paintings. The baroque angel, enlarged, ripped apart and put together.

In the end the viewer has to work with all these impressions and effects. These controversial experiences are the imprints of my artworks.

University of Debrecen – Mentor at the Creative Design Days